ADA compliance and Standards for Accessible Design are hot-button issues that ecommerce merchants can’t afford to ignore. Learn about WCAG 2.0 and important next steps for online retailers.

ADA compliance is a quickly evolving area in the ecommerce world, albeit one that is still shrouded in some mystery. While every online brand stands to benefit by increasing its accessibility to users, the present standards are often misconstrued and, in the worst cases, unknowingly neglected or violated. Beyond the ability of a retailer to label itself compliant, there lies a great opportunity to cater to a large market—people with disabilities represent $175 billion in discretionary spending, putting them at two times the spending power of teens and 17 times the spending power of tweens.

Speaking on the topic as a member of a panel discussion at the National Retail Federation’s (NRF) Big Show in January in New York, Blackhawk Networks Head of Product Gerry Gilbert told the audience that the waters are murky, but that it’s in the best interest of retailers—and their customers—to make a dedicated commitment to ADA compliance as soon as possible.

What is ADA Compliance?

In September 2010, The Department of Justice (DOJ) published the Americans with Disabilities Act (ADA) Standards for Accessible Design, which state that all electronic and information technology must be accessible to people with disabilities. These standards apply to all entities that have “places of public accommodation,” which naturally includes the internet and ecommerce enterprises.

Currently, the DOJ is still in the process of determining some of the specific regulations it wants to enforce, creating confusion for merchants and opportunity for legal experts in this unpredictable field.

“Retailers in the audience are probably very aware of what’s been happening in the industry over the last six months or so,” Gilbert said at the NRF show in January. “There have been a lot of trolling law firms telling online retailers that they’re not ADA compliant. The reality is that the first ADA laws were designed well before the internet. They talk about reasonable standards to create accessibility to all people, regardless of any disabilities. So the ADA is a very broad legal definition of what you need to do (as an online retailer to ensure compliance).”

Web content accessibility guidelines (WCAG) have been developed—and redeveloped—with the goal of providing a single, shared standard for web content accessibility that meets the needs of individuals with or without disabilities. These guidelines explain how to make web content such as text, images, sounds, code and markup more accessible to everyone, particularly those with disabilities that may restrict their access.

The WCA guidelines come in three levels, A, AA, and AAA, with the most common being AA. It’s more than a little confusing for most retailers, but Gilbert explained it this way to the NRF audience:

“There exists now an actual set of standards, WCAG 2.0, A and AA are the typical ones. So, over the last six months, we (online retailers) have spent a tremendous amount of time building into frameworks the capability to be compliant with WCAG.”

If your ecommerce business is not among this group, it should become a top priority right away.

What Are the Next Steps Toward Becoming Fully Compliant?

The key principles of WCAG compliance are ensuring that your ecommerce site is perceivable, operable, understandable and robust. It can be a tall order for online retailers who have little or no experience with WCAG compliance, so working with technological and legal experts can be beneficial. 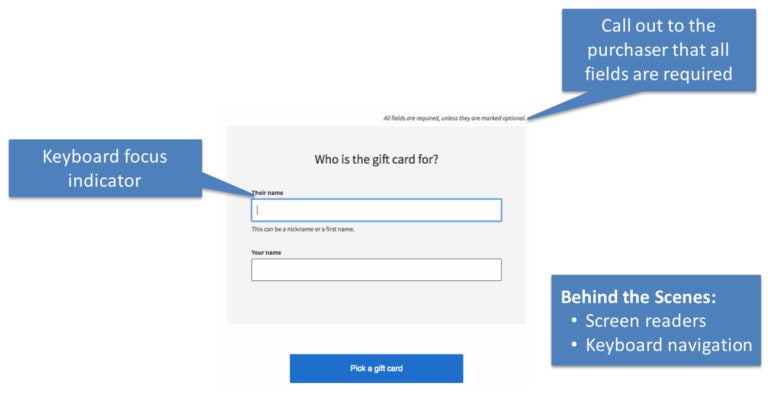 Be sure your site is perceivable, operable, understandable and robust.
Click to enlarge

Some retailers may have the ability to hire internal experts, which is important; however, it also makes sense to partner with a reputable company to streamline your efforts. In an age where most sites are run on agile framework and where code is constantly being released, it can be helpful to tap into self-service tools that allow you to run automated scripts and tests and receive alerts. The reality is that every time a retailer releases code as part of the ecommerce experience, it’s an opportunity to impact compliance to WCAG.

Full ADA compliance likely goes a few steps further, too. It’s not uncommon to test and find that you are fully compliant, only to complete a manual audit and find that you come up short. This is complicated by the fact that some standards are more subjective in nature. This is where working with trusted and experienced partners can keep retailers one step ahead. The foundational concept is to make your brand accessible to everyone—across channels—which should be the focus of all retailers.

While there may be legal ramifications for non-compliance, these should not be the only driving factor for retailers to evolve their accessibility strategy. When retailers improve customer experience across demographics, growth ensues. Retailers on the forefront of the evolving ecommerce landscape will take this into account and be ready to dig their heels in with the very hard work that lies ahead in achieving ADA Compliance.